A comic essay on new computing concepts (in German) by Dr. Julia Schneider and Noëlle Kröger

In summer 2022, SPRIND called for applications for the New Computing Concepts Challenge. In the first stage of this international innovation competition, 14 teams are developing new computing concepts that are to be implemented by means of hardware from mid-2023 in the following second stage.

The challenge is to develop new computing approaches with support by SPRIND that promise a significant reduction in resource consumption in terms of energy, time or space, or to address issues that could not previously be solved by computers. 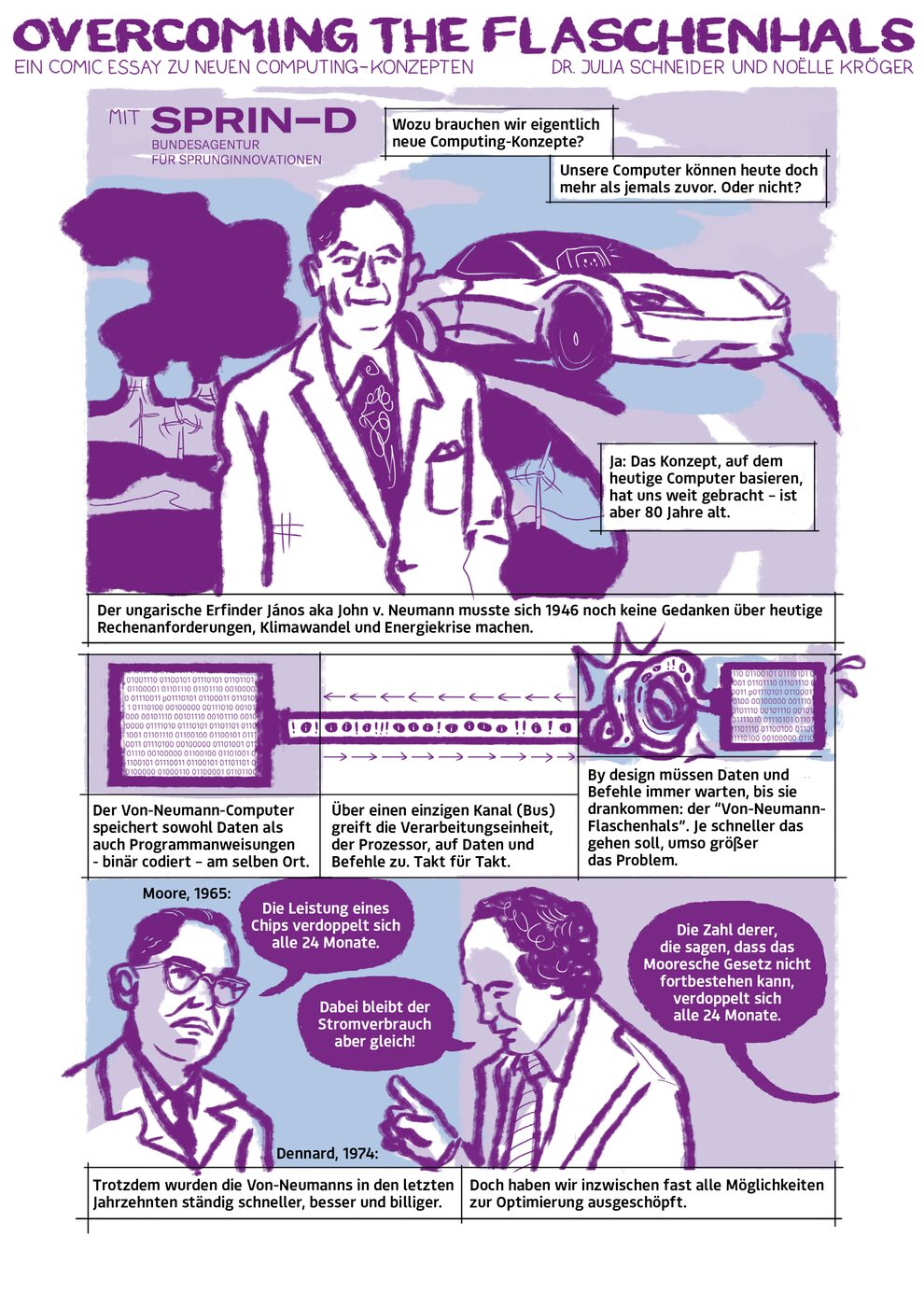 In the digital world of the future, swarms of artificial brains will be woven into the fabric - barely perceptible to humans - to support everyday life and the working world around us. Data from countless sensors and actuators will be read out by tiny computers, processed, merged via a network of data links into larger nodes with more computing power, interpreted, and fed back. In between sit huge data centers that handle the big tasks, managing and directing data, training artificial brains, and solving complex scientific problems.

But this hope for a human-supporting, connected world currently comes at a high price. If global energy consumption for computing and communications increases at the same rate as it has been, it will take up the entire, global capacity for energy production as early as 2040.

For more than five decades, Moore's Law applied in chip manufacturing. This law states that the number of transistors on a surface doubles approximately every 18 months due to the rapid further development of technology. Processors became faster and smaller as a result of the technically demanding reduction in the size of the structures on the chip. Computing power became cheaper.

Inspired by Moore's Law, the chip industry followed an agreed roadmap for decades, the International Technology Roadmap for Semiconductors (ITRS), which defined the next development steps for all subsectors, so that all stakeholders were prepared to make immense investments. On this basis, this unique industry sector drove the progress of computing.

The most widely used computing principle is the von Neumann architecture, whose central characteristic is that there is a common memory for instructions and data. Data and programs are accessed sequentially via a single channel. However, the shared channel, for whose bandwidth instructions and data compete, creates a bottleneck for the system's performance. The typical general-purpose computer, on a desk or in a pocket, uses the von Neumann architecture. There is no foreseeable solution to this problem through incremental hardware development. The von Neumann bottleneck can therefore only be eliminated by fundamentally new computing concepts. 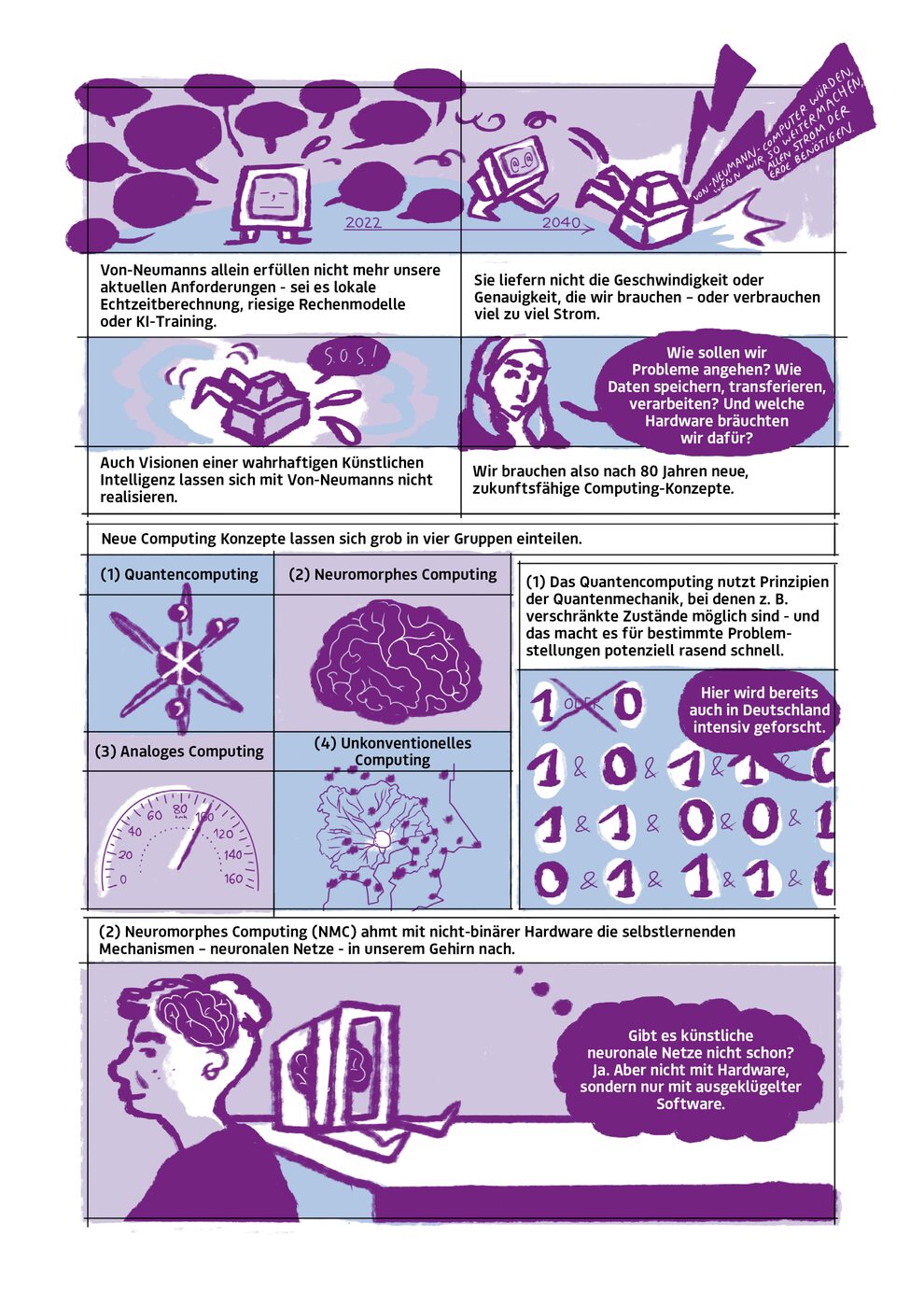 Besides quantum computing, alternatives to the von Neumann architecture do exist in the form of neuromorphic computing, analog computing and a number of other unconventional approaches. However, these approaches are mostly at the research stage and - with the exception of quantum computing - eke out an existence in the niche, away from major funding programs or industry investment. In view of the major technological challenges and the associated uncertainties in the development of these new technologies, the necessary investments are not only associated with high financial risk. They would equally have to compete against investment decisions along the innovation path that has been followed for decades. Thus, the semiconductor industry's previous strength - coordinating significant investments via a common roadmap - is now becoming a major hurdle to change.

At that time, the impetus for profound technological change was not primarily taken up by the established German automakers, but by American technology groups such as Google. The fact that the automotive industry has not yet been disrupted by autonomous driving systems from American technology groups only goes to show how high the technological hurdles are for these disruptive innovations.

Taking correspondingly high risks in the development of groundbreaking new technologies is the German government's mandate to SPRIND. We have the expertise to develop new computing concepts from Germany and Europe and to build up a strong international competitive position. The SPRIND Challenge "New Computing Concepts" is intended to initiate this development. Success is not certain. That is exactly why it is a task for SPRIND. 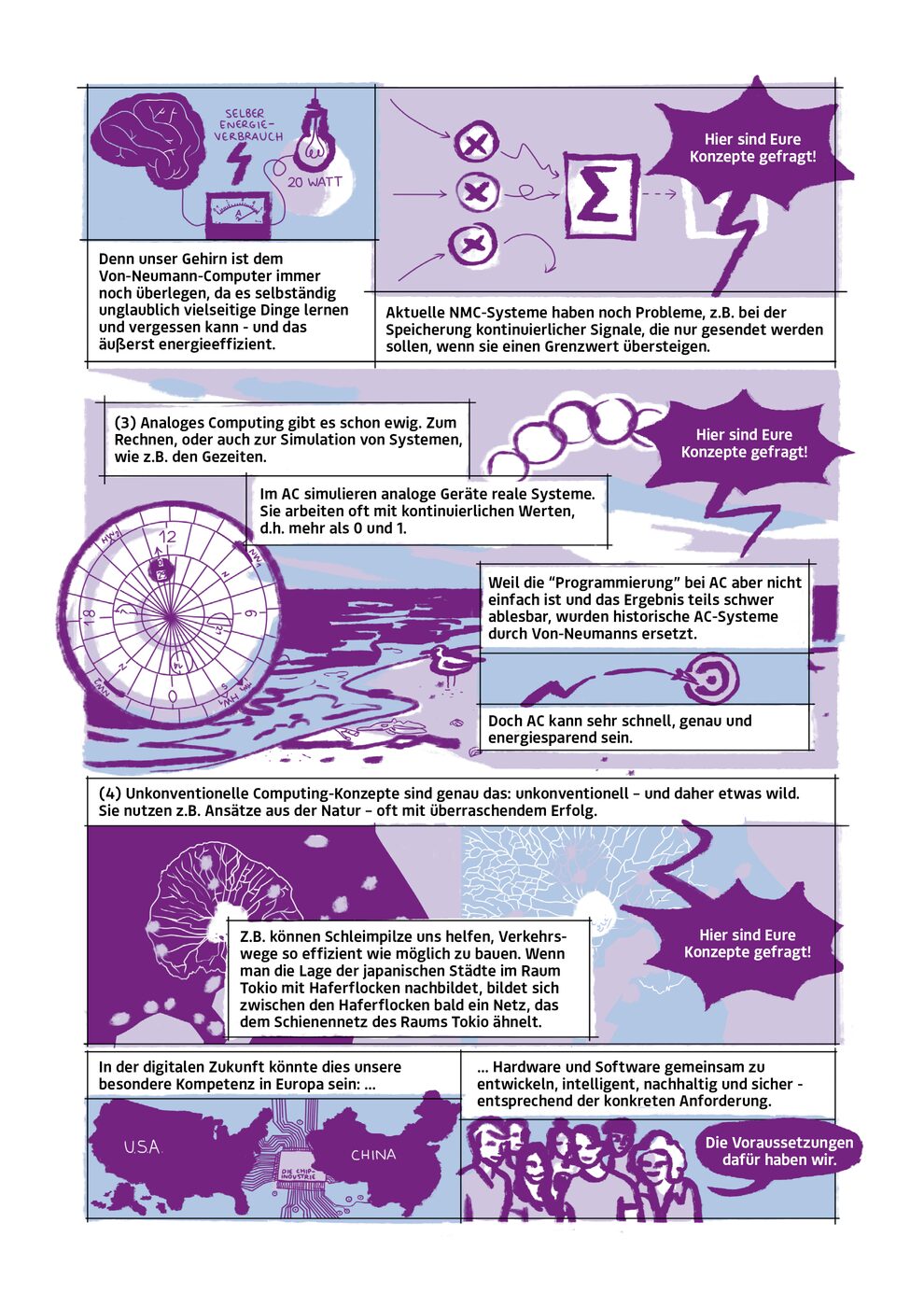 Although computers have a significant influence on our everyday lives, how they work remains a mystery to most people. This is why SPRIND wants to open up access to this abstract but important topic to more people with the help of a comic. To do so, the SPRIND team behind the "New Computing Concepts" Challenge has created "Overcoming the Flaschenhals" together with comic essayist Dr. Julia Schneider, aka Doc J Snyder, and the illustration by Noëlle Kröger.
Share →